An update to the Off-Site Levy Bylaw and Policy was approved in August 2021.

The monies collected by the Off-site Levy are used to build infrastructure that supports new developments. The basic principle behind the Off-site Levy is that growth pays for growth. The existing offsite levy bylaw, policy and model can be found on the Town’s website.

Key changes are summarized below.

Once the new bylaw is adopted, the updated offsite levy rates will apply to any new development or subdivision applications where the off-site levy is imposed.

A virtual open house was held on June 17, 2021 to discuss the proposed changes and answer questions from residents and stakeholders. A video of the open house presentation is available below:

Couldn’t make it to the Open House? Please contact the Planning Department at 780-624-2574 or email Alisha Mody, Manager of Planning and Development at [email protected] to receive a pdf of the presentation.

Key changes to the Bylaw

Update to Definition of “Subdivision Area”

The effect of these changes is that in the case of an off-site levy being imposed at subdivision, the off-site levies no longer apply to any lands being dedicated as roads. i.e. the per hectare off-site levy charge will not apply to lands that become a public road.

Removal of Adjustment to Rates in Non-Review Years

The adjustment of off-site levy rates during non-review years (Section 10(c) of the current bylaw) was removed. The Town is updating the levy rates every two years. This is sufficient to keep the rates current for Peace River.

Changes to the Rate Model

The off-site levy rates must be updated regularly to ensure that they are generated based on the best information available. The model has been updated with inputs to the end of 2020. The rate update reflects changes in infrastructure projects, project allocations, cost estimates, and development areas.

The updated off-site levy rates per area (Schedule B of the bylaw) is below:

The updated off-site levy areas (Schedule A of the bylaw) is below: 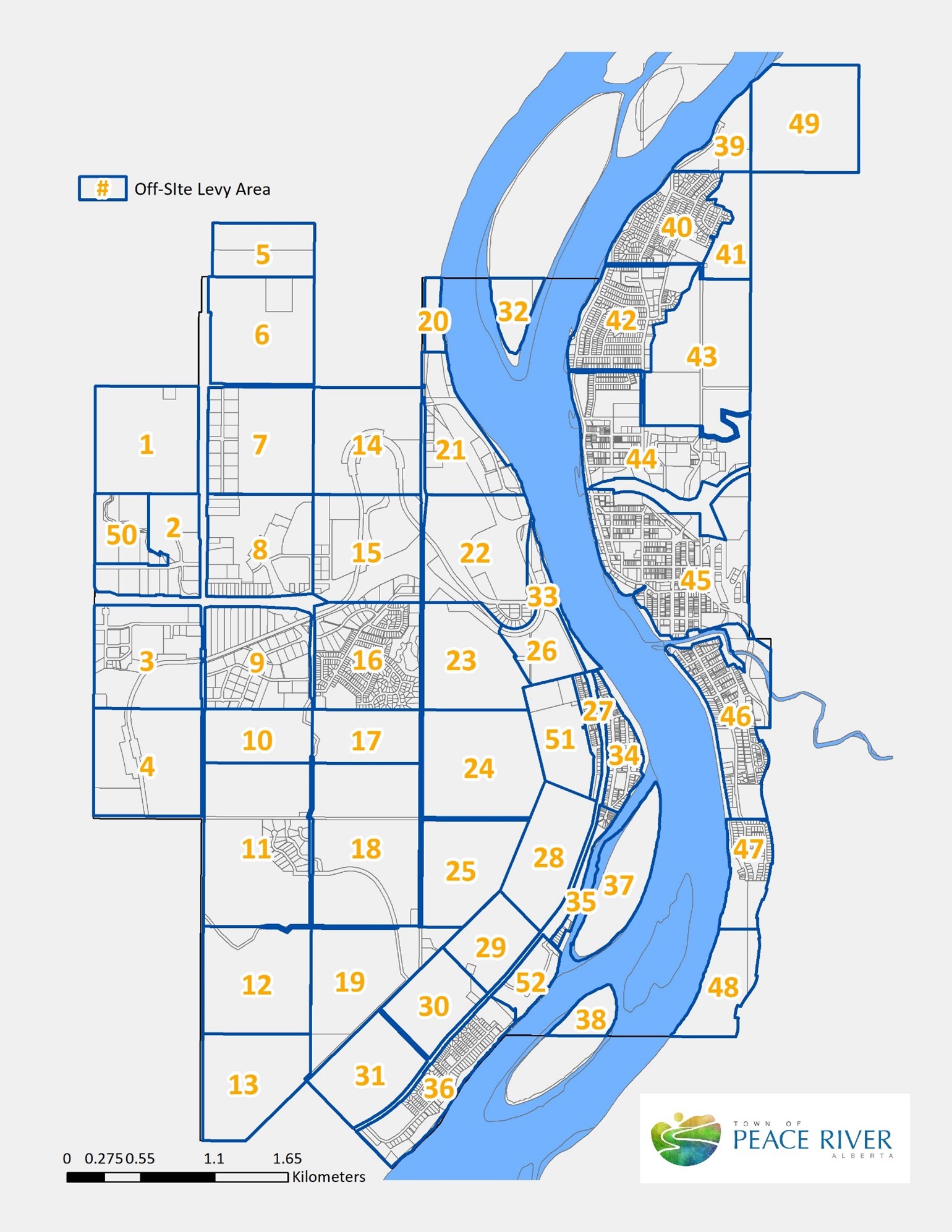 The Town of Peace River has had an off-site levy in place since May 1978. Off-site levy rates have been set using the current approach, a rate model developed by CORVUS Business Advisors, since 2009. The off-site levy report associated with each bylaw outlines the methodology used in updating and establishing offsite levies and the resulting rates for each infrastructure type and each offsite levy area.

For the 2019 update, Town staff continued to use the CORVUS model and made several enhancements to the existing methodology. Capital projections over 25 years have been rationalized, as have the portions attributable to future development. As such, the rates show a significant reduction to an average rate of $40,886 per hectare.

The table below shows the approved rates at the time against the rates provided for 2021.