Peace Regional RCMP with the assistance of the Emergency Response Team executed two search warrants at a residence on 82nd Avenue and 94th Street in the town of Peace River. Seven occupants from within the residence were taken into police custody, no one else was involved in the incident.

The residence was searched by Peace Regional RCMP members and a number of items seized including: 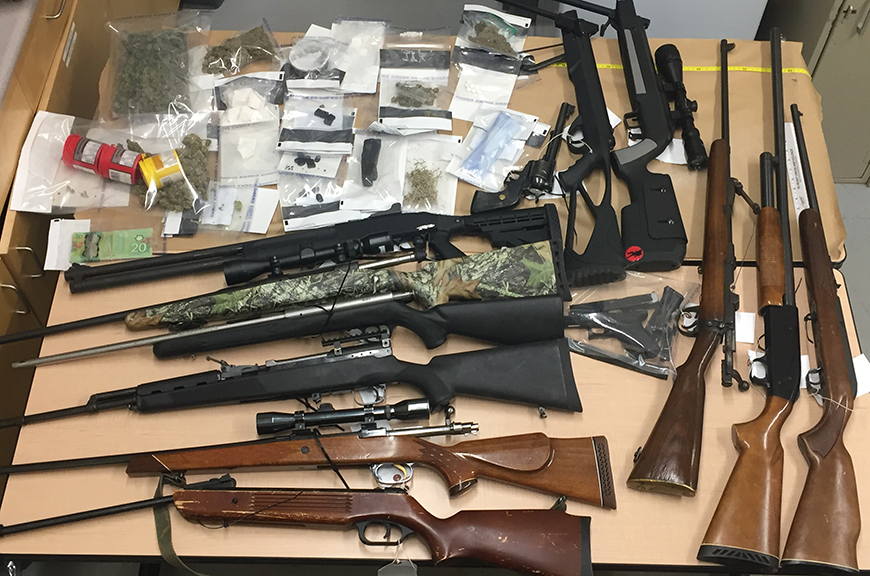 The following 6 occupants have been remanded to appear in Peace River Provincial Court, March 6th, 2017.

In total 57 charges resulted from the investigation notably; 44 of these are firearms related charges, 5 breach of recognizance charges.

In addition Darren Taylor faces 7 counts of  Possession for the Purpose of Trafficking under the Controlled Drugs and Substances Act for the illicit drugs seized by police.

The 7th occupant an adult male from McLennan, Alberta was transported to Edmonton area Hospital with serious non-life threatening injuries. These injuries are completely unrelated to the search warrant or police involvement.

The investigation including processing of exhibits is ongoing and additional charges are pending.

Peace River RCMP would like to advise a search warrant was executed at a residence on 94 Street in Peace River. The public is no longer asked to avoid this area.  Police are still on scene and continue the investigation. Seven people have been taken into custody and more details will be provided when available.

Peace River RCMP along with the Emergency Response Team – North (ERT) would like to advise there will be a police presence on 94 Street in Peace River today as officers execute a search warrant. Schools in the 94 Street area will not be affected.

The public is asked to avoid the 94 Street area and not to share details about the operation. More details will be provided when available.