(Pictured above from left, Steve Sanders Harmon Valley Production Superintendant for Baytex Energy is pictured with Town of Peace River Mayor Tom Tarpey, and President of the Peace River and District Chamber of Commerce, Shelly Sorensen after proclaiming Oil and Gas Awareness Day in Peace River on Feb. 13, 2017)

Commemorating 70 years of conventional oil production in Alberta Peace River, joined numerous Towns and Counties, as well as the Province in proclaiming February 13 Oil and Gas Awareness Day. In Peace River, the quest for oil stretches back beyond Leduc to the early 1910’s. During that time steamboats trawled the Peace River, trying to find the source of the oily sheen occasionally witnessed in the water.

A century later the industry has matured and now employs a number of people in our community and our neighbours community. Whether it’s direct work out in oil sands, or in one of the industry’s supporting roles, the community of Peace River has benefited from this resource. In order to commemorate the role of the oil and gas industry in Peace River Mayor Tom Tarpey and Chamber of Commerce President Shelly Sorensen, proclaimed today February 13, 2017, Oil and Gas Awareness Day. 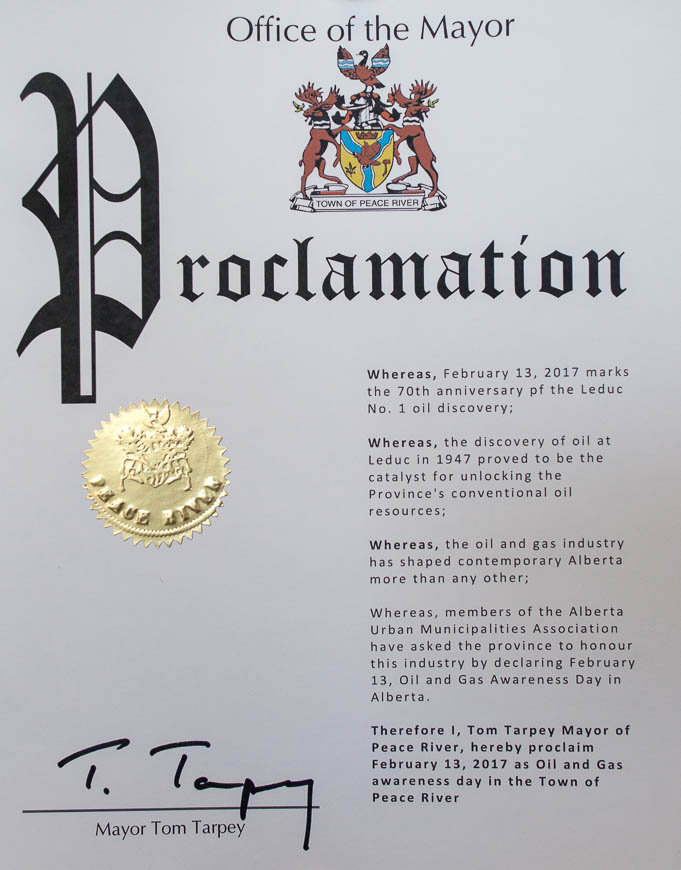